This article is overseen by ARE MC....thanx homeboy....keep funkin' around!


ARE MC started breakin' as MR. RECKLESS (no doubt inspired by the ICE-T/The Glove classic) around 1984 on the cardboards from the Aldi Supermarket around the corner in his hometown UDEN, together with best friend DTF who lived on the same street. Soon they started a breakdance group called THE HEADLINES, together with DTF's little brother DOKUS and a guy called MR. SCORPIO. In 1986 ARE MC (at that time called MC ROX) picked up the mic and DTF started off as a DJ. The name DTF was born (DJ TROUBLE FOX). The duo called themselves ROX FOX and started writing songs and throwing parties in the garage. As they got better and started to do the occasional performance, they changed their name to THE RHYME FEDERATION. Their first performance was RUN DMC imitation on their school, just rap and human beatbox.


Uden being the small town it is, THE RHYME FEDERATION soon met another beginning rap crew through JUICE, a mutual friend.The other crew was called TERMINATING POETS, a duo made up of DJ OH JAY and rapper KIDCAINE. Inevitable as it seemed,  the crews became friends, exchanged tapes of their music and decided to fuse into one big posse to bumrush the scene (1989). OH JAY became the regular DJ as his skills exceeded those of DTF who decided to go on MC'ing. As both crews also brought all their friends in the mix, the group expanded with guys like DC-1, TRUST, SON LYTE, ALL JAZZ, KID V and JUICE who all played parts within the posse, being dancers, lyric writers, protection etc.The D.O.P.E. (Dancing On Pure Energy) POSSE (DP) was born.


The first tracks soon got layed down; OH JAY prooved to be big on heavy uptempo funky productions and ARE MC and KIDCAINE became the main rappers with D.T.F. doing occasional rapping as well. After a brief live showcase on the radio (station "Kersenland", today "Skyline") for the "Deli Soul" show hosted by DC LAMA, DP soon played support act for D.A.M.N. and 24K. 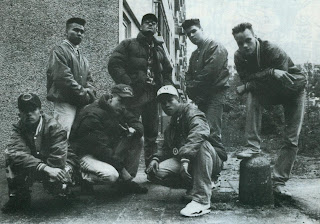 D.O.P.E. Posse 1990
From left to right: SON LYTE, TRUST, ARE MC, KIDCAINE, ALL JAZZ, D.T.F., OH JAY
Doing lots of local performances, the crew tested out their tracks on the audience and perfecting them along the way. 24K's recordcompany DJAX (see 24K topic!) got their hands on a rough demo recording of DP tracks. Recordlabel owner SASKIA SLEGERS saw the potential but figured the group wasn't quite there yet and still needed some practice and experience. Months later the crew was offered the opportunity to record an album and on march 15th 1991 the finished album called "Mind over matter" was officially presented at "De Nieuwe Pul" concerthall in their hometown. 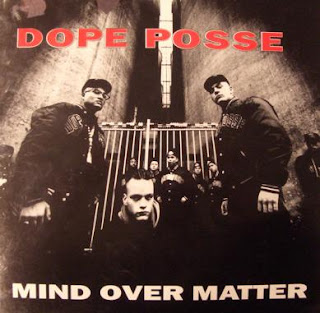 
The group differentiated themselves from a lot of other rapcrews in The Netherlands at that time with a very energetic stage show. Performing with 6 or 7 guys on stage at once wasn't an exception and in addition the members all wore the trademark DP jackets and baseballcaps. Unfortunately the DP image with the jackets and the "posse" part in their name, often got misinterpretated as the group being a tuff streetgang or something, while actually they were just guys loving good music. In the slipstream of acts like 24K and D.A.M.N. they headed a strong generation of rapgroups from the South of Holland with acts like BUGAS, DIVORZE, TRAUMATIC, NORTHSIDE STYLAZ, AK47 etc.
The posse's repertoire was mostly straight up funky b-boy tracks, one of the exceptions being the message track "Black and white united":


Allthough having performed at the DMC-convention in Amsterdam that year and also at the notorious Amsterdam hip hop club Aknathon, the group was heavily ignored in the west of Holland. One of the reasons being a very negative albumreview by rapjournalist KEES DE KONING in the Dutch musicmagazine "Oor". This article prooved to be very disrespectfull to people engaged in hip hop in the south of The Netherlands. Funny enough it eventually took a rapper from that same Brabant provence to bring real success to KEES DE KONING in 1995 but that's another story all together. It is my personal view on things that a whole lot of jealousy might have been involverd here from the west's rapscene. Fact was that apart from URBAN DANCE SQUAD, TONY SCOTT and MC MIKER G, all full length rap albums at that point were released by acts from the south (24K, D.A.M.N., DIVORZE POSSE, DP). 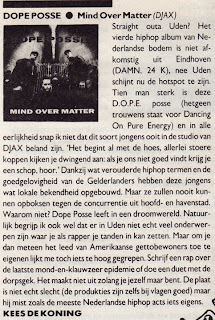 DJAX c.e.o. SAKIA SLEEGERS was impressed by the DTF solo joint on the album called "DTF the manipulator". She liked his flow and the fact he mastered the English language. She eventually offered him the chance to record a solo album, also because ENB of 24K advised SLEEGERS to do so. Together with OH JAY, DTF jumped to the occasion and later on in 1991 the album "From a smooth point of view" saw the light of day. The album sounded different as the DP album...more downtempo/mellow on the production and the delivery of DTF was more laidback then ARE MC's or KIDCAINE's. There was no annomosity within DP due to this release; being all good friends everybody granted DTF this opportunity. 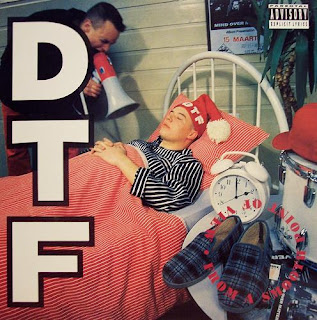 From a smooth point of view album 1991
Allthough still doing shows all over Holland (unfortunately "the west was never won"), Germany, Austria and Belgium, some groupmembers lost focus on the group after a while and the DP slowly left the spotlights. The sound of rap was changing in The Netherlands, also because of the influence of the prominent "Villa65" radioshow. The typical DP show with dacncers on stage etc. quickly became out of fashion and slowly but surely they simply didn't get booked for shows anymore.
Download the unreleased track "Runaway" (1992) here!!
Nevertheless...4 years later an album dropped by a group called FAMILY JEWELS. A 16 track cd with amongst them some killer tracks like "Everywhere I go", "Forever hip hop", "I feel fine" and "Givin' ya more". It became obvious this group actually consisted out of the nucleus of DP; ARE MC, DTF, KIDCAINE and OH JAY. The track "To the party people (in the Netherlands)" got released as a single.The name D.O.P.E. POSSE was dropped ' cause it sounded too dated in the rapscene of that day.
The album saw the first appearance by a very talented musician and singer called U-GENE. Old differences got put aside and a radio showcase was givin' for the "Villa65" show. Download some audio of that showcase right here: 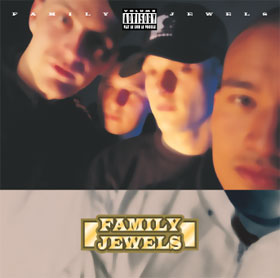 The FAMILY JEWELS album, allthough being great, didn't make too many waves in a country that was really taken by rapping in the Dutch language by that time. Dedicated to the music they loved, the various DP members still recorded tracks in the years to come...many at the so called "Dope Lab", a homestudio at the house of DTF (later on at OH JAY's crib). Collabo's got done with artists like L-ROCK (of D.A.M.N.), U-GENE, I.N.T., DJ RACHI, DEADLY MANIACS etc. Here the foundation got layed for the succesfull UJ project.....a progressive mix of rap, funk and soul music done by OH JAY and U-GENE. Shows at the "North Sea Jazz Festival", "Lowlands", "Crossing Border festival", "Drum Rhythm festival" and at the radioshow "Twee meter Sessies" were a fact. In 1999 a 5 track mini-album was released, simply called UJ, which also featured rapping by DTF and ARE MC. 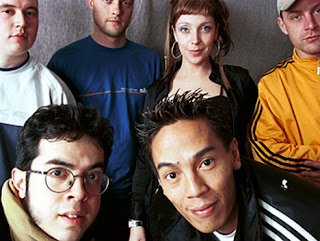 DTF, OH JAY, MISS MO (singer), ARE MC
U-GENE, ? (bassplayer)
In between things with UJ, OH JAY managed to pull off other projects in 1996/97. For these collaborations he recorded tracks with Eindhoven rap legend L-ROCK a.k.a. POCKETS. The 1997 album was titled PHAT POCKETS but like the FAMILY JEWELS effort, the album soon slipped into obscurity. A damn shame if I may say so cause the album was plain dope in my opinion. Another "under the radar" project with POCKETS were the THE BOOTY SNATCHERS releases in 1996/97, music that's kinda hard to label...(electronical jazz trip hip hop?).
OH JAY will get himself even more established in the years to come, to finally be looked upon as one of the most gifted producers in The Netherlands. He gains his biggest commercial successes with productions for rapper BRAINPOWER from 2001 untill this day. Other big projects over the last decade were LIQUID SPIRITS, FRONTLINE and RAP CLASSICAL. 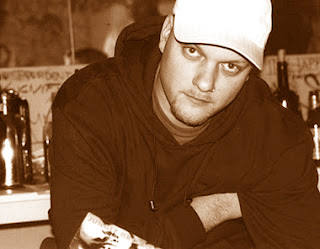 OH JAY
Next to OH JAY it's pretty much only ARE MC who still gets busy on the frequent tip. ARE MC has been recording and doing shows with the Amsterdam funk band SEVEN ELEVEN since 1995. The connection with SEVEN ELEVEN goes way back to 1990-1992 when this band performed with DP several times. These joined shows probably were the first combined funk/rap performances on stage in The Netherlands ever.
In 2006 ARE MC released a straight up rap album called "Spaced out" that also features POCKETS, SPEED1 (of DIVORZE POSSE), SLIMM DIESEL and....how could it not be.....DTF.
Since 2006 Dutch DMC-winner DJ RACHI often stands by the side of ARE MC as his DJ. He was also responsible for mixing ARE MC's 2007 album "Throughout the years".
At the moment ARE MC is workin' on a straight up b-boy project called FIRST CLASS with old friends DJ CHARM and SPEED1. Next to that a fifth SEVEN ELEVEN album is soon to be dropped so be on the lookout! 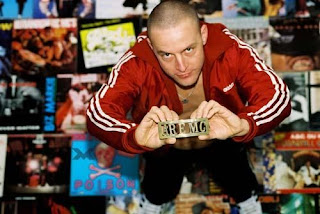 ARE MC
DP suffered some heavy personal losses as two of the members since day one, died at a very young age. Dancer ALL JAZZ passed away in 2001 and crowdhyper/stageguard JUICE passed away in 2010..... 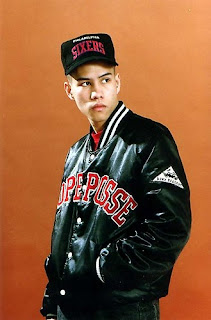 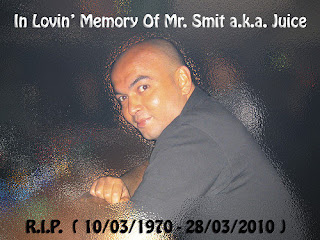 Chris The Wiz
Oss, Netherlands
Dutch guy with a huge love for '80's hip hop culture. Devotes a shitload of his time listening to the music, reading about the culture and practicing some occasional graffiti.